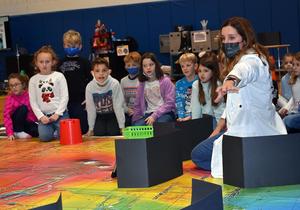 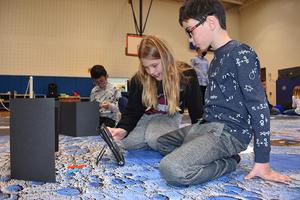 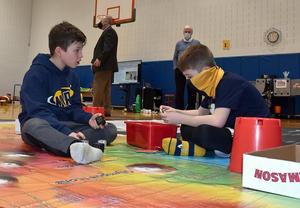 Students at Mars Area Elementary School now have an opportunity to visit the surface of the Moon and Mars without having to board a spaceship.

This month, in their STEAM (Science Technology Engineering Art Mathematics) classes, students in Grades 2-4 are joining in a variety of activities, including stop-motion animation and Cubelet robotics projects, all centered around giant maps of both Mars and the Moon, which the school received through a grant from the Aldrin Family Foundation ShareSpace Education program.

“We received these maps all because of our awesome community connection,” says Colleen Hinrichsen, STEAM teacher. “Anytime we have a space-related special event in the town, Mayor (Gregg) Hartung and the Mars Exploration Celebration team are excited to reach out to be sure our students can make the most of those opportunities.”

When the Aldrin Family Foundation became involved in Mars Borough’s 2021 Mars Exploration Celebration, held Aug. 27-28 in Downtown Mars, Mayor Hartung connected the organization with the school. Throughout the summer, Hinrichsen met virtually with members of the Aldrin Family Foundation to plan how the maps could be used by students and by the people of the community in the future.

The Mars Exploration Celebration committee helped to secure funding for the maps through donations from Armco Credit Union and Mars Planet Foundation. And, the school was able to obtain two different-sized giant maps of both Mars and the Moon.

“It is the hope that students at this age have the opportunity to think and wonder about space before they would formally study it,” says Hinrichsen. “It’s almost as if they are playing with space concepts now, and will someday be the next generation of space/STEAM innovators.”