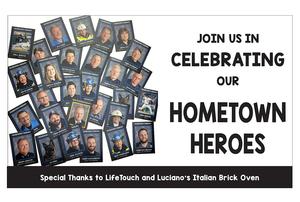 All K-6 Students to Receive Packs of Trading Cards Mars Area School District, working in partnership with Lifetouch and Luciano’s Italian Brick Oven, is highlighting our Hometown Heroes through a special program, honoring local first responders and others who are working to make a difference in our community.

On Tuesday, Dec. 7, the District will distribute packs of Hometown Heroes trading cards to more than 1,885 students in Grades K-6. One (1) lucky student in each grade level (K-6 — including both AM Kindergarten and PM Kindergarten) will receive a pack containing a GOLDEN TICKET in the form of a trading card, featuring Dr. Mark Gross, Mars Area School District superintendent.

Those students, who find Dr. Gross's trading card, will be invited, along with the Hometown Hero of their choice, to attend a free dinner at 5 p.m. on Tuesday, Dec. 14, at Luciano’s Italian Brick Oven (Mars). Both David Bednar and Will Bednar are also expected to attend.